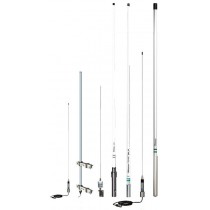 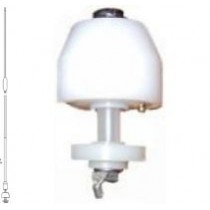 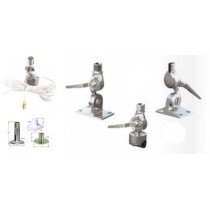 TIPS ON CHOOSING THE PROPER ANTENNA

Antenna Length  – Length is of paramount importance when deciding on an optimal antennafor your vessel. Remember that the higher an antenna is mounted and the further it extends upward, the better signal broadcast and reception  will be. That said, be sure to allow adequate lay down room for clearing low bridge of other obstacles.

Gain - Gain is a measure of how much of the input power is concentrated in aparticular direction, expressed with reference to an antenna radiating in all directions equally at the same power level, stated in decibels (dB). Generally, the higher the gain, the greater the communication range.

Beamwidth – Beamwidth, in generalized terms, is the angular separation between the half power points on an antenna’s radiation pattern. The relationship between gain and beamwidth is important when selecting an appropriate antenna. As gain increases, beamwidth is compressed or narrowed. A narrow beam can cause fading in rough or rolling seas. Small, lightweight boats, which tend to roll excessively in heavy seas, normally do not use an antenna with a gain rating higher than 6dB. Larger or more stable vessels can use higher gain antennas effectively.

Low Angle Radiation -  Shakespeare helped boaters manage the gain vs. beamwidthcompromise by pioneering low angle radiation techniques in the 1960’s,  and incorporating this technology into our line of marine antennas. Low angle minimizes fading while maximizing range, even during excessive boat roll in turbulent seas. A normal angle does not offer as much range and wastes power in non-effective areas.

Usually a 4 foot antenna. Best suited for powerboats under 24 feet or sailboats.

Usually an 8 foot antenna. Best suited for boats over 23 feet.

Usually any antenna 12 feet or taller. Best suited for boats over 32 feet.

A FINAL WORD - The greatest tip to keep in mind is that no matter how much you pay for your radio, its performance will be directly proportional to the quality and performance capabilities of the antenna. Don’t compromise... Insist on genuine Shakespeare.

Your enquiry is empty!